What do I think about Lankhmar: City of Thieves 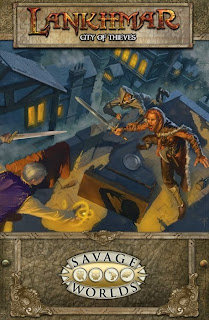 Savage Worlds had ventured before into the Sword & Sorcery genre with Beast and Barbarians from GRAMEL. Now, Pinnacle has thrown in the hat into the ring with Lankhmar: City of Thieves, based on the Fritz Leiber's stories.

I never really got into the adventures of Fafhrd and the Gray Mouser. I bought the paperback of Ill met in Lankhmar, but the version I had started with the origin stories of the duo and those didn't really drawn me in. I think I should revisit the book and start with some later stories. Nevertheless, I consider myself a fan of Sword&Sorcery and almost every fantasy game I run was heavily inspired by the genre. Quite frankly, I never could get on board with the "magic is part of everyday life" approach of high fantasy, but I digress...

I was excited to get my hands on another of Sword&Sorcery Savage Worlds game. While, just like the Beast and Barbarians, I will probably not run the game as is, I am always on a prowl for some tweaks to the Savage Worlds system to use in my own campaigns. So, with this in mind, this is what I think about Lankhmar: City of Thieves.


If you have never played/run Sword&Sorcery style game, Lankhmar would be a great start. The book gives some good advice on the genre without being condescending. Those hints are scattered and hidden among the descriptions of locales, magic items and rules, but they are there. In fact, the descriptions of Lankhmar and the surrounding lands are full of good Sword&Sorcery fluff. Reading through the gazetteer and  GM's will give you numerous ideas for adventures. The book also sports a selection of Savage Tales - short adventures ready to be used in almost any campaign. It was disappointing not to see an adventure generator. I wholeheartedly enjoyed the one in Savages Worlds of Solomon Kane, and not having one specific to Lankhmar is somewhat of a let down.
Overall, I enjoyed the fluff portion of the book. I would have probably enjoyed it more, if I was more familiar with the world. Surprisingly fluff is not where the book shines for me, it is all in the...

Honestly, I think the designers behind Lankhmar had really outdone themselves. I enjoyed each and every new rule and rules tweak they had put in. You get the expected new races, edges and hindrances, but you also get an expanded magic system and a half dozen setting rules. All of those combined emulate Sword & Sorcery genre very well. Those are my favorite parts of the book, so let's look at them one by one:

I was presently surprised with this book. I was on a fence about getting another Swords&Sorcery Savage Worlds game, because Beast and Barbarians worked well for my needs. What I found is some awesome rules and cool city setting. Fortunately, knowledge of Fritz Leiber's works is not a necessity, and the book gives you enough lore to run a campaign comfortably. Even if you are not planning on running a game in Lankhmar, there is enough good stuff here that is worth the price of admission. If you are fan of  Fafhrd and the Gray Mouser,  thinking about running a Sword&Sorcery game, or you would like some cool tweaks to the Savage Worlds system you should check out this book. In the meantime, I will give my paperback copy of Ill met in Lankhmar another spin. 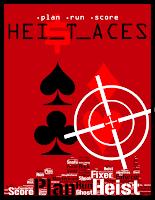 Updates and other musings: